NYC landlords of older residential buildings have unique challenges when it comes to heating and cooling. Buildings built before the 1940s, typically utilize radiant central heating systems powered by steam or hot water.

Interestingly, these central heating systems were originally designed to encourage occupants to open windows during cold months. This was in response to the fear of Spanish Influenza during the early 1900s. Unfortunately, due to their central boilers, the later widespread installation of double-paned windows and a variety of design factors, it's not uncommon for heating and cooling to be inefficiently distributed.

Adding to the inconvenience factor, landlords must judiciously determine when to switch from heating to cooling twice a year; a process that often takes several days. Do it too soon and you'll risk violating the city's minimum heat legislation should an unexpected cold-front blow through. Do it too late and you'll be fielding tenant complaints for days.

With that said, there are a few things you can do to optimize heating and cooling systems (and tenant comfort) in older apartment buildings. In this article, we'll cover the basics.

The pipes of your central heating system circulate hot water, steam, and air through your building 24/7. Season after season, environmental debris, dust, and gunk build up within the pipes. And season after season, no one cleans them! Unfortunately, it's not uncommon for such heating and cooling systems to be left unmonitored for years once installed.

This is problematic since the oxygen contained within the unit's water is continually released as it's heated. When left unchecked, the water's oxygen and natural mineral deposits lead to corrosion. Not only does this shorten the longevity of heating and cooling systems, but it also causes blockages that contribute to inefficient energy usage.

How to Clean Them:

The two most common methods for cleaning are using power flushing machines and draining the central heating system after removing radiators. Both involve fairly complex steps you may or may not feel comfortable passing off to maintenance. Hiring a professional plumber is always an option.

You can read more about that HERE.

For maximum economical efficiency, it's essential landlords check radiator functionality annually. Radiator heat warms units in two ways: radiation and convection. This process requires unobstructed air circulation to work efficiently. Regularly removing dust and lint from radiators (and their fins) is a must!

Further, significant heat can be wasted when radiators are mounted against cold, outside-facing walls. As suggested in The New York Times, sliding a sheet of aluminum-faced foam insulation board behind the radiator can remedy the situation.

Other small radiator tweaks include annually boiling air vents in vinegar to clean residue and investing in thermostatic radiator valves to better control unit temperature. You can also encourage tenants to use cotton or wool radiator covers to prevent overheating of units. 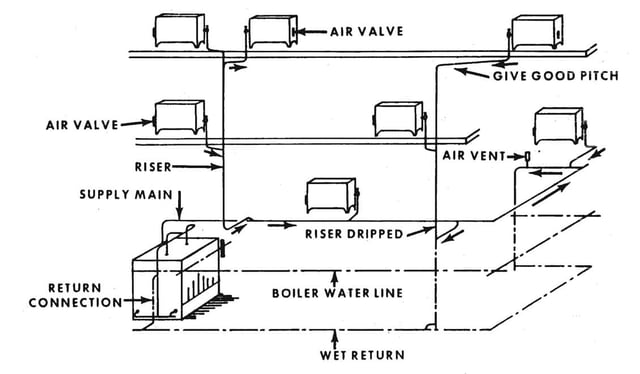 Cross-ventilation is essential for maximizing heating and cooling in order buildings. Besides encouraging residents to open doors and windows during mild weather conditions, search your building for any old openings that can be re-engaged. It's not uncommon for old residential buildings to have interior transform windows that were previously closed-off (and painted over) by former owners. Finally, consider how air flows onto each floor and how open stairwells and skylights impact the building as a whole.

When boilers or water heaters are not in use they lose heat. Adding rigid insulation under the tank of your central heater can reduce standby heat losses by 25 to 45 percent, according to energy.gov. This change alone can save 4 to 9 percent in water heating costs. Though the process is easiest when installing a new water heater, it can be done at any time.

By slowly implementing the aforementioned tips, you'll find yourself pleasantly surprised when comparing next year's energy expenses to this year.

is the founder and president of The Water Scrooge, which offers maintenance-free, tamper-proof water conservation tools to landlords and homeowners. The Water Scrooge is based in Lynbrook, N.Y.